With thousands of construction clients Builtin has seen more than our fair share of claims from plumbers, gasfitters & drainlayers. Here are a few examples to help explain why liability insurance is so important for them.

A plumber installed a new ceramic basin into an upstairs bathroom during a renovation.  While carrying it up the stairs he dropped it, cracking the basin.

Policy Response Scenario 1 – The homeowner had purchased the basin two weeks earlier and supplied it to the plumber to install.  Because it was not his property the plumber was covered for the cost of the replacement basin (less the excess).

Policy Response Scenario 2 – The homeowner had told the plumber just to get a standard basin using his trade discount, so he went to a trade-only plumbing warehouse and purchased one,

intending to add it to the invoice. He wasn’t covered in this scenario because he still owned the basin at the time the damage occurred – it was still his property, so there was no loss to a third party, which you need to trigger a liability claim. 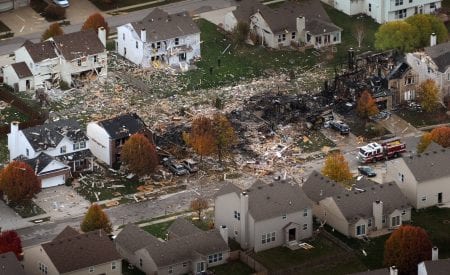 A gasfitter was engaged to retrofit a gas appliance into a residential home. The gas supply had been turned off but not locked when the homeowner returned home from work. The homeowner was able to turn the gas supply back on, which caused gas to leak into the home to thigh level. This was not detected by the residents and a toaster subsequently sparked off a large gas explosion, which destroyed the house and severely damaged neighbouring properties.

The gasfitter was able to claim on their public liability insurance. However, the limit of cover they had in place was insufficient to cover the full cost to repair all the damage.

A drainlayer was contracted to dig drainage trenches for a new residential home. During excavation the digger snagged a Chorus cable that had not been correctly marked on the plans. The damage resulted in a significant outage in local broadband and phone services. Chorus was called out and repaired the damage, sending the bill to the contractor. The contractor was also held liable by a local business for the cost of their lost sales during the outage.

The drainlayer had done all the right things to identify the location of any underground services prior to starting the job. As a result, they were able to claim on their public liability policy for the amount of the repair costs demanded by Chorus. Their policy also paid the losses of the local business that flowed from the initial damage.

Every individual claim is unique and policy wordings and interpretations from different insurers vary. Consequently, the outcome to a claim cannot be assumed from these examples.